Today’s submission comes from artist  Laura Johnson. You can find her @lauraartistic on instagram. She completed this portrait of her dog in colored pencil with the goal of realism. She said she had a harder time drawing her own dog than others she has done in the past given she knows the dog. I love that you used so much blue in the highlights and that bandana looks so awesome! I also really like your paper color choice for this, it works SO perfectly with the rest of the portrait!! 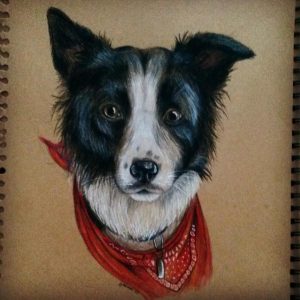 Taking a look at a few things we can adjust to improve on this even more, first let’s look at the initial drawing. You’re so close in so many areas, but you’ve thinned his head out in others enough that it made his face appear much thinner than it should. 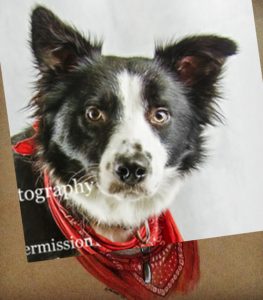 When I imported your reference photo into photoshop and outlined that one, then removed the reference photo, you can now see where things are off. You are SO CLOSE! Your drawing skills are great, but you want to make sure everything is exact or you can completely change the look of your subject. The main two issues here are the width of the head on the left, his nose is too small, the head extends too far (when added together makes the face appear that much thinner), and the one ear is a bit off on the right. 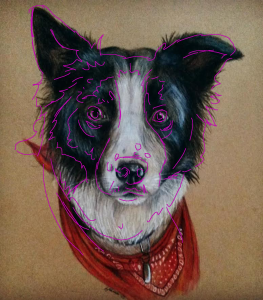 While those things may seem minor, they all add up to what the subject will look like and can have a HUGE impact on the finished piece. If one of those things was off it wouldn’t be so obvious, but when you add them all up it makes all the difference.

Moving onto the coat, you have the right idea using so much blue for the highlights, but I would hype that up even more! Look how much of a highlight is on the left (which would then explain putting the highlight on the bottom of that eye in the photo). It can often seem like we are going too strong on the contrast, it’s scary, but it will make your work look so much more realistic!!