This week’s submission comes from artist Charlene. You can view more of her work at http://www.creativonero.de. She has completed this horse in acrylic on a black canvas. Her goals were to figure out high contrast between the horse and the background. The detailing on the horse, the shading, the hair…its amazing!! 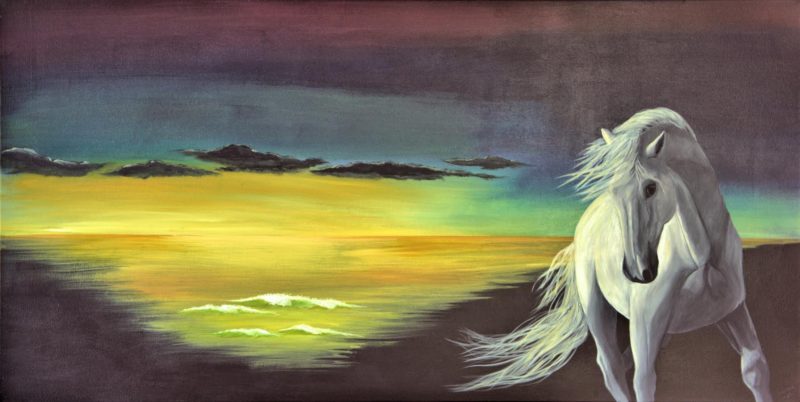 Another interesting thing, I’m not sure if you did this intentionally or not, but you are really falling within the rule of thirds on most of this. 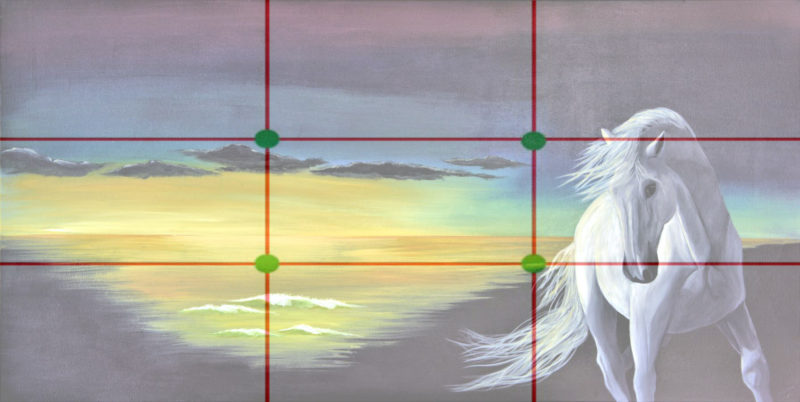 Adjustments I might make for placement would be to drop the waterline down to the bottom third. You might want to play around with moving the horse over so that his head and front leg fall on that line on the right. This may or may not be a good choice given the rest of the balance of the piece, but it’s something you can try in photoshop when you’re coming up with your initial layout. Either way, the lineup of this is really nice!

My first tip for this is to work on getting a better photo. You’ve got a lot of glare going on on the right side especially. Getting photos of dark photos is a PAIN!! I know first hand! The best way I’ve found is to take a photo in an area that is not quite as bright as I would normally go with other paintings and mess with the shutter speed and iso on my camera. You will need a tripod for this because taking the photo in a darker setting with a slower shutter speed will cause blur even in the best of cameras. Before I started messing with camera settings I used to just try the photo in different locations around the house until I got the right shot. 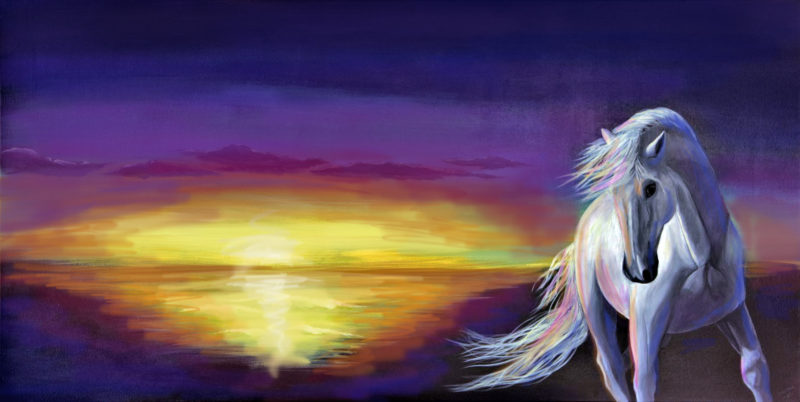 My next tip is on the colors. First I want to say that you did an amazing job of blending yellow to blue smoothly without ending up with muddy green. That is not an easy thing to do, especially over a black canvas!

When you want to create a sunset that fades from yellow to blue, one of the best ways to create a beautiful transition from color to color is to  fade yellow to orange to magenta to purple then to blue and finally dark black/blue if you want to go that dark. Straight yellow to blue is a bit harsh in many cases. I think it works better if your entire piece is more of a daytime/light scene without black. Here because of the black I would definitely go with the yellow>orange>magenta>purple>blue fade. This sounds harder because you’re using more colors, but it’s actually FAR easier to get a nice blend between colors because the colors in that order blend so well together. Yellow to blue can cause so many problems with unwanted green.

My next tip is to get rid of those waves. They are drawing attention away from the horse, but they aren’t so detailed or blended that I feel that should be a point of attention.

Now the clouds I like, they are in a nice position, but I would tone them WAY down. That black is just so harsh up against the yellow/blue.

My last adjustment was to pull some of the new colors in the sky into the horse. You want him to feel like he’s really a part of the scene and by pulling more of those colors into him, you can create that. One of the great things about painting white animals is using all of the other colors in the painting on their coat. On yours you did a great job pulling the blue and yellow into it, so you clearly understand that concept, but with more colors in the background I am able to make the horse pop that much more using those extra colors!