This weeks critique comes from an artist who wishes to remain anonymous. She has completed this portrait in colored pencil. You’re pretty accurate to your drawing as well and have started with some great shading! The detailing on that scarf is STUNNING!!! 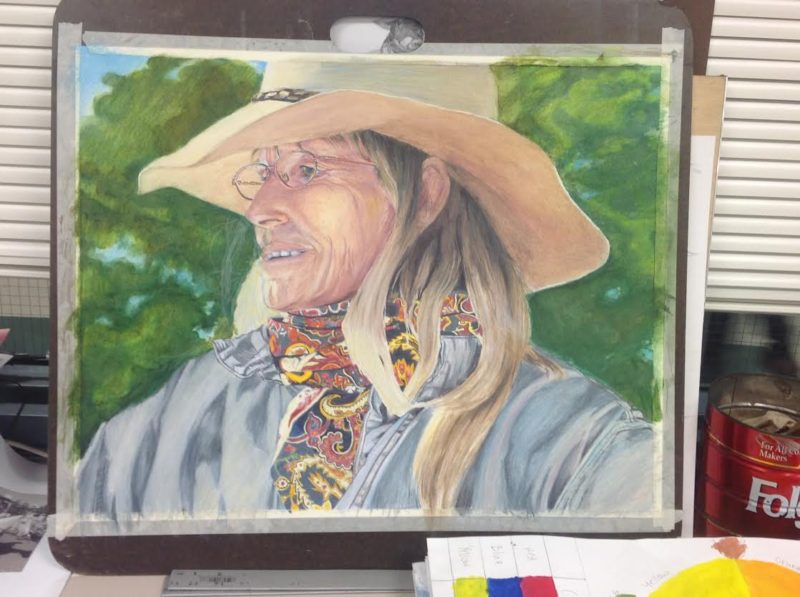 One of the first things we notice when shrinking down your art with your reference is how much darker the darks are on your reference photo. One of the things that makes that photo interesting is the stark contrast between those lights and darks. When you keep everything midrange, your lights don’t appear light enough. That is just because you don’t have the darks in there yet.

As you can see when we pull up color swatches, the ones on the left are from your reference photo where the ones on the right are the same spots on your artwork. You can go SOOOOO much darker on your work. The great thing is you’ve already got your detail in there, now it’s time to go back in with the contrast!!

I know getting strong contrast and your darks really dark is scary. Don’t worry, we all feel this way! It feels like we are going WAY too dark and that we will ruin it. In fact, we are more often than not, not dark enough. By putting your reference photo next to your artwork on the computer (you could do this with a collage app on your phone as well), it makes it much easier to see where that contrast can be increased.

The next thing you really want to watch, while much of your drawing is quite accurate, the placement of your highlighs on some areas aren’t quite right. For example, the highlight on her cheek is very round, this makes that portion of the cheek as it is shaded now appear to stick out from her face more than it actually does. Her nose is having the opposite problem. The highlight on the underside is so narrow and the shape in general is more angular than the models real nose, so by increasing where that highlight is, and softening the curves you will make her look much more like she really looks. With colored pencil especially, it is SO important to make sure your drawing is completely accurate before you start. Once we start laying in color, it can be nearly impossible to move things if we realize the nose isn’t shaped right, or the hat isn’t quite in the right place. You’ve got amazing drawing skills, I would just slow down a bit and spend some more time on that initial drawing to make it even more awesome!

The next thing I want to look at is her hair. Right now it is completely solid with very little of the scarf or shirt peaking through. Make sure to get some of that so that it looks like soft hair instead of being so solid. Also notice how her ear line just continues right into her hair. While that is how it is on your reference photo, this is one area I would adjust. I would move part of the hair out just a bit so that that line doesn’t continue through as it does now, so that it’s not one piece.

Overall her hair is a lot like the rest of the piece where the shadows are muted. Get those sharp highlights and shadows to make the piece really pop at the viewer!! It may seem odd to let her face stay darker while her hair and shirt have such bright areas, but it is part of what makes that photo more interesting!