Today’s critique comes from a Lane Lambden who has drawn Johnny Depp in Graphite. You can check out more of his work on his site at http://lanelambden.portfoliobox.me/artwork

Lane’s goals were realism. He said he’s having a hard time having the portrait come out realistic enough and moving away from the cartoon look. Your drawing is very good and you weren’t afraid to get your contrast! Great job there!! I like the movement you’ve got in his hair too. You’ve drawn the clumps of lights and darks beautifully!! 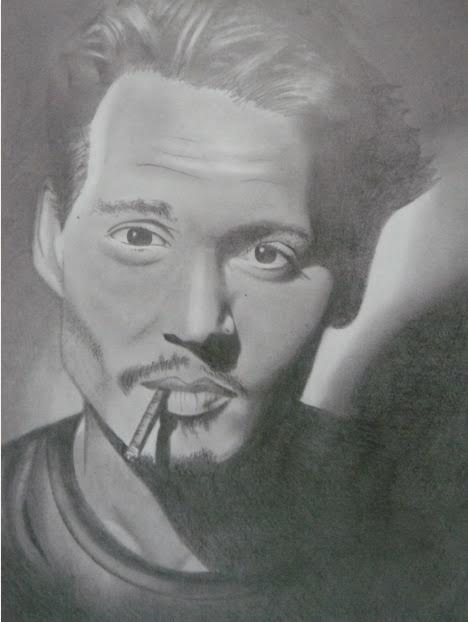 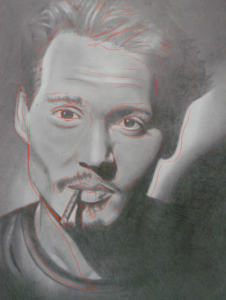 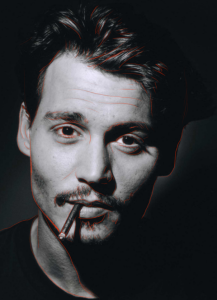 You’re close, but there are a few adjustments that could be made. Even tiny adjustments in the shape of the eye will change the expression of someone completely. The mouth is another area to watch for. Remember that the upper lip will almost always be quite a bit darker than the bottom because of how the light hits it.

One thing that is odd about the reference photo itself is how dark the shadow is on the right side of his nose. It makes it look a bit deformed. As the artist, this is where you can come in and add just a hint of light under part of where the nose actually is to separate the darkest shadow under his nose, and his nose itself.  Sometimes you will have an amazing reference photo like this that has an area that in photo no one questions, but in art, people will assume you drew it wrong so you will want to adjust for that.

Now the two main complaints you had were that you couldn’t get your darks dark enough and that you felt that you still had a bit of a cartoon look. For the darks, I have two tools I use when I want something really black. The first is carbon pencil. It’s sort of somewhere between charcoal and graphite. It’s not as soft as charcoal, but it’s also not as hard as the graphite. The main negative is that it is matte where your graphite will have a bit of a sheen to it. This isn’t something that bothers me, but I know some artists don’t like it. 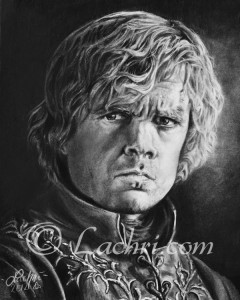 This is a portrait I did using both graphite and carbon pencil. The carbon pencil gets REALLY black, which I love. It does tend to have a more gritty look than graphite so keep that in mind too. I like the gritty look because it gives skin a bit more texture.

Another thing I use to get my darkest areas really dark with graphite is to use a mechanical pencil filled with AIN 4B lead. This lead gets much darker than even your 8b graphite pencil will.

For the cartoony look you feel you’re getting, this is actually a really easy fix. You are doing great with your shading, but you’re still outlining things. Cartoons have outlines, people do not. Instead of the outlines that you’re depending on to separate your subject from the background, just use shading. Hyping up the contrast from one area to the next (like making the background darker than the side of the face), will keep you from feeling the need to add outlines to make those areas look separate.

This is going to go for every bit of the portrait. Looking at the wrinkles on the head, those should just be shadows with both a dark area and a highlighted area to make them look like wrinkles and not lines. The mouth on a man will not be outlined unless he’s wearing lipstick. You want to make sure that the mouth fades more into the skin on men or it will look too feminine. Here, the shadow on the bottom should be exactly how you have it with the high contrast but you won’t want the outline on the upper lip. This is also going to be the case when drawing children, don’t define the outline of the mouth too much. The big change you want to make is in dropping out actual lines and focusing more on your shadows and contrast instead.

This really is good work, keep it up!!