This week’s submission comes from artist John Svedese. John has been a comic book illustrator his whole life and this was his first time trying to draw something realistic, and a portrait at that! This is awesome, I can really see your comic book style mixed with the realism here. While that may not have been your goal I personally love the end result! 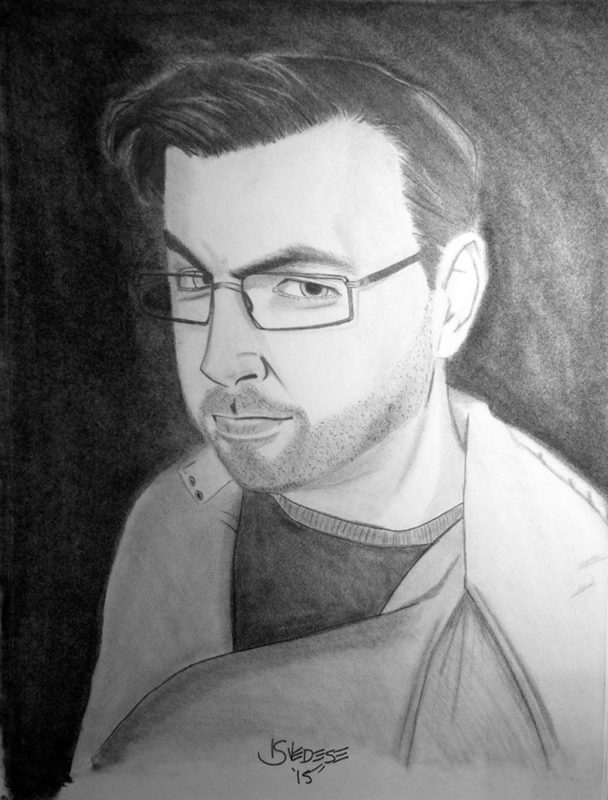 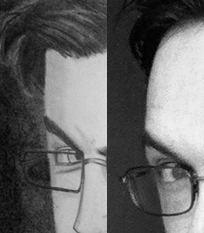 Taking a look at a few things we can adjust to reach your goals, first let’s look at the initial outline. While it’s close, there are some areas that are off like the area next to the eye on the left. Right now you are leaning towards more straight lines vs areas that should be more rounded. This is where I can really see your comic experience coming into play. See how the reference photo has this outward curve next to the eye. That one thing being off throws off everything next to it. Now the eye doesn’t have enough room to be the right size. This leads to the eye being drawn smaller which throws off where the nose and other eye start and stop. One thing that may seem minor being off in your portraits can throw off the rest of the face. You counter one mistake but it actually causes several more.

Ideally, when you are drawing your outline, spend more time really paying attention to every little thing. The hairline, the shape of the face, the detailing in the ear, every little bit needs to work properly with every other bit. You’ve obviously got great drawing skills, I think at this point your challenge is going to be when shifting from your comic style into realism. You have to train your brain to see things in a different way than you’ve been seeing them for the past several years. That alone is probably the biggest challenge you will face. A tip to help you adjust how you look at things is to start working upside down. 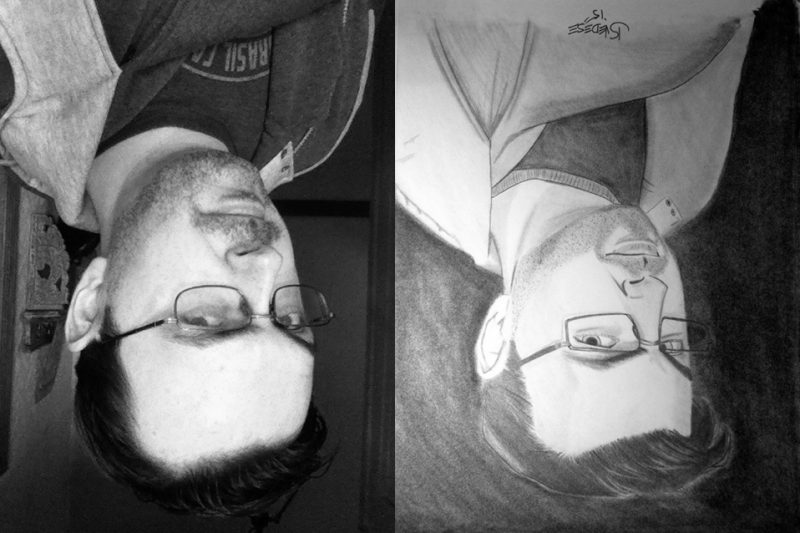 Look how differently you see things when we adjust this. It’s so much more noticeable now where areas are not right. The overall head shape, the chin is not rounded enough, the hairline, you can see so much more this way because you’re tricking your brain into seeing the actual shapes instead of an eye, a nose etc that your brain is trying to draw the way it’s always drawn.

My next tip is on choosing your reference photo. The one you’ve used has a flash or a very strong light washing out any shadows in your face which makes it look very flat. This makes your job as an artist much harder than it needs to be. Try drawing from a photo that was taken in natural light instead so that you can see the shadows better.

While you can go darker on much of the shading here, that photo is really to blame on how flat the portrait comes out, especially given that this was your first realistic portrait. You may hit a time where you’ve done enough portraits that you know where to increase shading and shadows even on a washed out photo, but when you start, go for a stronger photo to work from.

My last tip is on the outlines. Cartoons (or comics in your case) have outlines. People have shadows and highlights. Unless you’re trying to combine that style with realism (which like I said earlier I do like the look of), don’t outline things. The nose, the ears, these areas especially are too lined out. Instead add a shadow on the other side of the nose that will separate it from the cheek, not a line.

For your first realistic portrait, you’re off to a great start!!