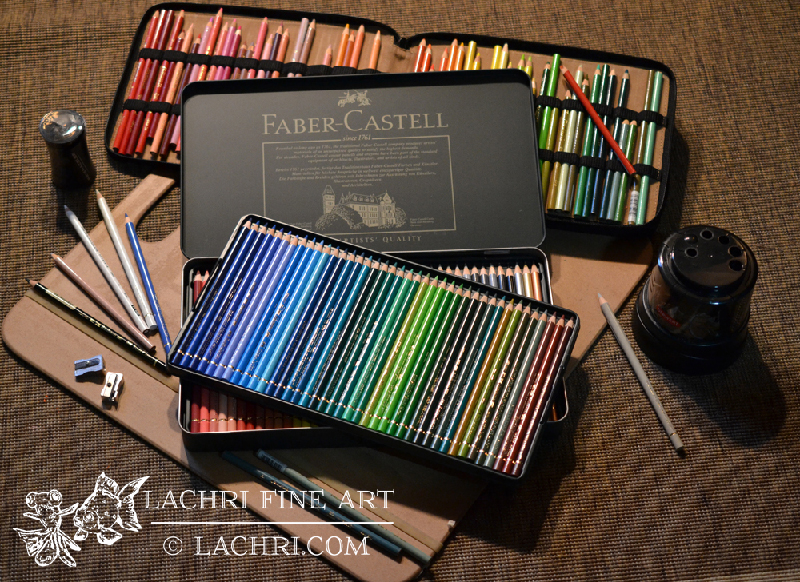 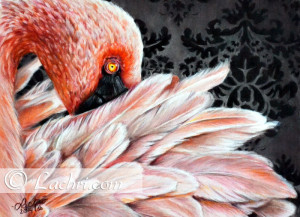 Earlier this year I was working on a colored pencil piece for a youtube tutorial. I have always used prismacolor. Everyone knows they’re the best right? Well its the only brand any of the art stores in my area carries so unless I wanted to order online I didn’t have much of a choice anyway.

Prismacolor used to make great products, but several years ago they started having their pencils made in Mexico. Now I’m not saying awesome stuff isn’t produced in Mexico…but something went totally wrong with prismas when they did this. Their wood casings are now crap. They splinter when you sharpen them. The lead is not centered in most pencils. Not centered? Who cares?! Well, you will when you find that sharpening an off centered lead breaks inside the wood casing due to the uneven pressure points. Prismas are VERY brittle. Now I don’t judge them for being brittle, I judge them badly for not being produced in a way that helps to prevent that brittle lead from breaking…bad wood casings and off center lead are completely unacceptable for a brittle lead. 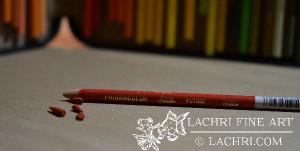 After finishing that flamingo I was SO frustrated. I felt like I was spending more time fighting with my supplies than actually producing art. I had reached a point where I didn’t enjoy working in colored pencil. This was one of the reasons I was not doing many CP videos at the time. I absolutely did not want to have another pencil fight. It’s no fun to be involved in a losing battle!
I took that frustration and used it to push me to research other pencil brands. I see on the colored pencil art groups I’m in where people are using several other brands. I was so sure that prismacolor was the best, I was hesitant. Alan Wollett (one of my favorite CP artists) had recently shared a flamingo he had completed with the polychromos pencils by Faber-Castell. The detail that he got in this piece (shown in the video) was STUNNING!!! I wanted my work to look like that! I bit the bullet and ordered my polychromos from DickBlick.com. At $193 for the set of 120 pencils they were a big purchase for me. 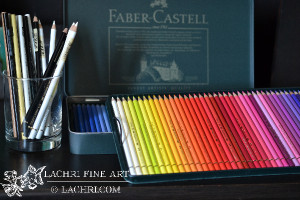 I dove right in with a highly detailed piece of an eagle using only the polychromos pencils. It was a totally different experience in working with these. The polychromos are an oil based lead vs the prisma’s wax based lead. The polychromos are not as creamy, so it took more layers to get the background covered but I found that they layered SO much better than the prismas that it wasn’t a problem. The pencils don’t break at ALL while you’re working with them. They sharpen to a really fine point and hold that point. Being so detail oriented in my work this was a HUGE deal. I was able to get detail with the polychromos that I had never dreamed of with the prismas. It was so much more fun to work with colored pencils and not need to sharpen non stop…and when I did sharpen the wood casings didn’t splinter and break down the side like is so common with prismas. Being oil based they don’t build up a wax bloom like the prismas, making it possible to layer WAY more. I was quite happy with the color range of these pencils as well. I was worried because prismas do have more colors available, but the polychromos colors are more practical and natural for me. There are SO many prismas that I own that are colors I never ever use. Plus, because of the layering capabilities of polychromos, I found I could mix (layering multiple colors to create a new color) way easier. 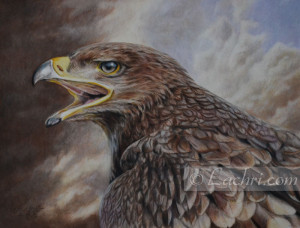 People still ask me “should I buy Prismacolor or Faber-Castell Polychromos?” In the end I absolutely prefer the Faber-Castell Polychromos to the Prismacolor premier pencils. In my opinion Prismacolor is currently a defective product (bad wood casings and off centered lead). I have issue giving money to a company that is perfectly ok with selling an item like this to their customers. The only thing that I did not like about the polychromos were the white and cream pencils. They are quite translucent, so they don’t have the coverage of a wax based pencil. I continued to use my prismacolors for those colors but have since switched to Caran d’Ache Luminance for my white and cream shades. They cost more than the prismas, but you know you’re getting a pencil that won’t break because you had the nerve to sharpen it…or to look at it wrong. When considering how much waste there is with prisma becasue of this, the luminance really aren’t more expensive.

Just to be clear, I’m not saying that if you choose to work in prismacolor that you can’t complete a beautiful piece. You can. They are not my preference for several reasons, but the quality control issues make them an absolute waste of money for me. I can’t tell you how many times I ate through an entire pencil because the wood casing continued to split no matter what sharpener I used.

The one really nice thing about Prismacolor is that they are available from almost every art store here in the US, including open stock. The convenience of buying them may make them worth it to some people. The Faber-Castell polychromos are available at most online retailers. To me it is totally worth the inconvenience of having to buy online just to know I’m getting a good pencil. Even the open stock can be purchased online. I get mine from either DickBlick.com or JerrysArtarama.com.