This weeks submission comes from artist Richard Barnett. This is either an oil or acrylic painting, but he did not say in his submission. While he had been drawing for quite some time, he had only been painting for 6 weeks at the time of this painting! This is awesome, the shadows and highlights are beautiful! The looser brush strokes are consistent throughout the piece. I would never have guessed you were so new to painting at the time of completing this! 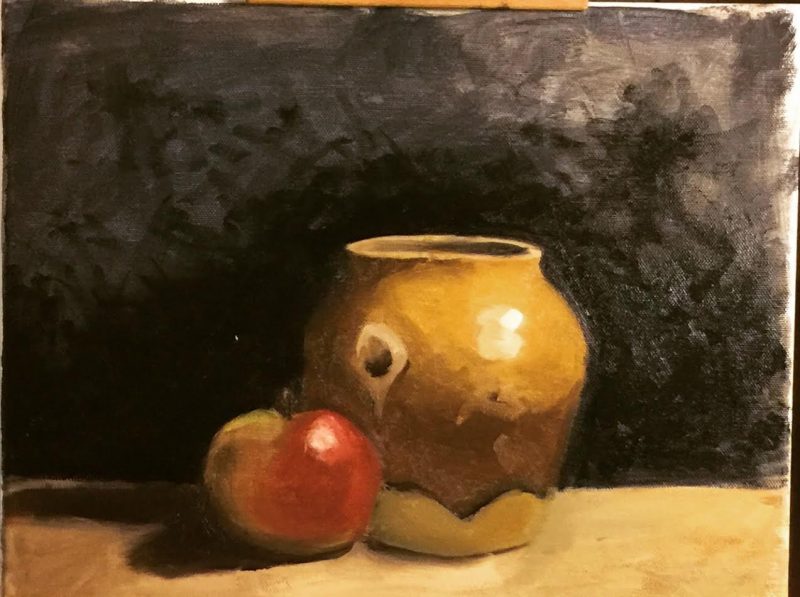 Taking a look at a few things we can adjust to improve on this even more. First, looking at the background color. You’ve used a lot of black. Now I’m a huge fan of black paint, so you won’t hear me telling anyone not to use it, but I would recommend glazing another color over it or mixing another color into it so that it doesn’t come out looking flat.

For example, look at the difference it makes by adding purples/magentas into the background and shadows. This color works well because of the yellows in the piece.  There is now a lot more depth in the piece with that slight shift.

Even given that though, really it will come down to personal preference and sometimes using just black will help you to achieve the feel you want more, so even here I wouldn’t dare say one is right and one is wrong, it’s just something to consider when using black. There are times I personally want flat black for my background too, again it just depends on your goals, but if you want more depth, add another color!

Next, the bottom of the vase has what appear to be a shadow on the bottom pattern. This darker shadow separating the bottom and the top color is causing a weird illusion. It feels like the bottom is separate, another object, or sticks out quite a bit from the rest of the vase, like it’s not flush. If you tone down the line between those two spots that will help a lot. I would also suggest adding more of a shadow on the left-hand edge. That whole section should not be as light as the area around where the light is hitting.

My last tip is on the shadow cast by the vase and apple. Usually,  with shadows that are cast by a sharp light source like you have here, you will have them slightly darker along the outer edges, while the center of the shadow is a bit lighter where light is reflecting from the object. They won’t be one solid color or lightest on the outer edges unless you have a soft indirect light source where the shadow doesn’t have such a sharp, well-defined edge. I think with most things you can find exceptions to every rule, but more often than not, you will have a slightly lighter area on the inside of a shadow like this.