Today’s critique comes from artist Ginger Booker. You can view more of her work at Facebook. This was only her second drawing and she used Prismacolor colored pencils. SECOND DRAWING?! WOW!! This is awesome!! You’ve done a great job capturing his expression and with details and the drawing itself! 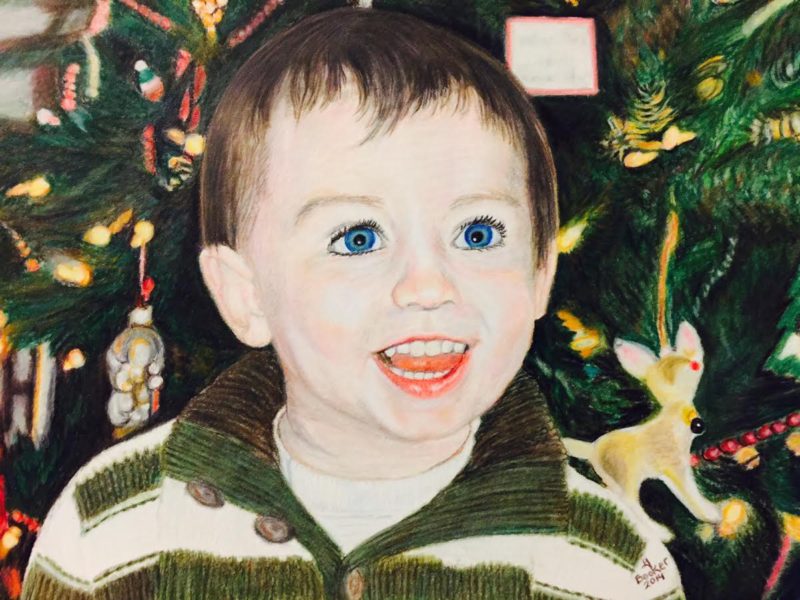 Taking a look at a few things we can adjust to improve on this even more, first, you’re using a photo that was taken with a flash which is making your job much more difficult. All of the whites (teeth, eyes, sweater) are completely washed out. When you’re new to portraits, I strongly recommend using photos that are taken in natural light for quite a while before you jump into something taken with a flash. The reason for that is that once you get enough practice, you could take a photo like this and just know where you should add shadows from experience alone.

The next adjustment I would make is to darken up his skin tone a LOT. You’ve left everything nearly white. You have the areas where shadows would be started but they are not even close to being dark enough. Even given the flash being used in this photo, you could still create a lot more dimension if you darken up your darks.

The pupil is off slightly, but given that there is no shadow from the upper lid, this makes it even more obvious than it otherwise would be. For the highlight on the eyes, this is another caused by the flash in an unnatural way. If you look at the video below you will get a better idea of how you will want to create a bigger shine on the eyes. Even if it isn’t in the photo, this is something I would strongly recommend adding to all of your portraits.

That video may be helpful for the eyelashes as well. His are far too dark for a child and each strand is too thick making it almost look like he’s wearing mascara. For the eyelashes, you will want an extremely sharp pencil and a fairly light hand.

Looking at his mouth, this area you’ve adjusted so that it is more coral and orange than pink and red. Given how pale his skin is in the drawing it wold look too bright either way. The problem isn’t in the values of the lips but in that the skin around his lips aren’t dark enough making it seem like the lips themselves are what is off. Sometimes the problem with your values won’t be the area you’re working on, but the area next to it that needs adjustments. 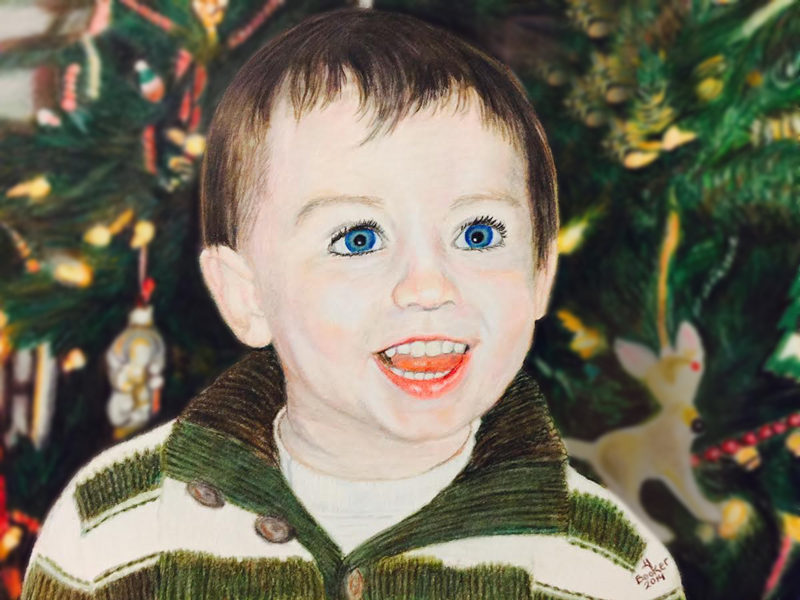 My last tip is for the background. You’ve drawn all of the ornaments quite bright and it distracts from the subject. By blurring out the background and toning down some of the ornaments (the reindeer) and removing the rectangle shape above his head, that pushes your subject forward and creates a lot more depth in your piece!