Today’s critique comes from Todd Cox. You can view more of his work at http://toddcoxart.com/. Todd has completed this piece in acrylics with the goal of combining realism and impressionism. Wow. Just wow! You have captured not only a beautiful scene, but you really did combine these two styles well. Your brush strokes, colors, values, everything is stunning! One problem I often see is where an artist tries to combine two styles but ends up stuck in the middle. None of the piece really has the looser brush strokes of impressionism, but its not realistic enough for realism. This is a great example of mixing the two styles well. 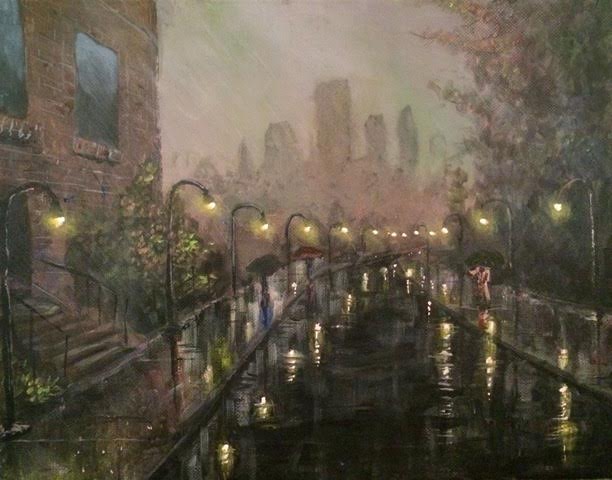 You’ve used a fairly limited palette but it doesn’t feel like it given your values and contrast. This one really does pull you right into the street. Both the building up close and the trees to the right are darkest towards the edge of the canvas which work great as sort of page blockers. Keeping the street as dark as you did was key in making those reflections really pop. If you had used those same exact colors on the reflections in the street but left the street lighter, they would’t have popped like this. This is a great example of how much of a difference strong contrast will make.

I’ve only got a couple of tips on this one. First for the buildings in the background. If you soften them up just s bit, it will help keep the viewers eyes moving down the road. Right now they pull the eye up a bit. Even though this is very loose, make sure to keep the buildings back there very straight. The second one from the right is curving inward.

My last tip is on the lights. To create a little more depth, you can tone those lights down some. One argument to leave them that bright is that they do pull the viewer down the street quite well, so this is one area where you can use a bit of artistic freedom to choose which you prefer, drawing the viewer to that area, or creating more depth and atmosphere in the piece.

You have done an absolutely amazing job on this painting. It is one that the viewer can really get lost in, which is a great accomplishment!