Which Canvas type is right for your paintings?

Today I’m going to be talking about the differences between four different Fredrix Pro Series canvases. The type of canvas that is right for your paintings will depend on how you’re applying the paint to the canvas. To start with, all of the Pro Series have what is in my opinion the best stretcher bars out there. Not just because they won’t warp, but because the bar itself is curved in a way that as you paint, you’re not pushing against the inside corner edge of the bar which can cause a weird look on your painting because of how the brush hit that ridge. These, being rounded  on the inside against the canvas avoid that problem altogether.

I also want to add that Fredrix are the only canvas that I buy anymore. I have had enough bad experiences with off brands and their warping stretcher bars combined with occasional problems where the paint doesn’t want to stick to whatever they primed the canvas with that it just isn’t worth the trouble for me anymore.

I’m not going to lie, for years when I heard artists talk about painting on Belgian Linen I thought it was more of a name brand/trendy type of thing. “Look at me, I’m so fancy, I paint on Linen!”. As it turns out there really is a good reason so many artists love working on Linen canvases. The weave is very tight and smooth making for a beautiful painting surface when you want smooth blending and a lot of small, clean detail work. This canvas is perfect for oil or acrylic paint.

This one is just what it sounds like, Linen that was primed with oil instead of a water based primer like the Belgian Linen. This means that it is only suitable for oil painting. Because I like to do acrylic underpaintings on my work to save time, I generally go to the Belgian Linen, but when I want something done completely in oil, this is my go to canvas. The paint just glides across the surface. It is really easy to get smooth blending with this canvas and it’s perfect for fine detail work.

This is a 100% Cotton canvas that has a much more textured surface and is a heavier weight than the previous canvases I mentioned. It handles all of the styles I tested on it fairly well. It would by no means be my go to canvas if I wanted a lot of detail work or if I was trying to get smooth blending with acrylics (which is harder to do than the oil paint I used for this demonstration). If you’re mixing heavy palette knife work and brush work in oil paint, this may be a good choice for you.

This is the heaviest weight of the canvases I tested. It is a heavy cotton duck canvas. This canvas has a LOT of tooth (texture). It’s going to be ideal for painting with heavy textures. Not only is there a lot for the paint/texture mediums to grip to having so much tooth, but being so heavy weight mean’s it isn’t going to be prone to sagging like a lighter weight canvas would with so much added weight from the texture you apply. If you plan to get any sort of brush work detail, this would not be the best canvas for you.

Now let’s take a look at all of these canvases in action in four different styles of painting. I used Winsor and Newton and Webber’s Permalba white and Liquin as my mixing medium for these tests.

Normally my weekly patreon videos are whatever my Wednesday painting was of, but being that this was different than normal, I’ve added voiceover tips to the snowy owl from last winter, so make sure to head over and check that tutorial out 🙂 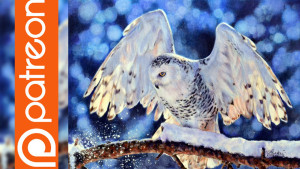